We sat down with Absoluxe’s Interior Designer and Artist in Residence Sally Proctor. To find out more about the inspiration behind the designs and the challenges involved in bringing the suites to life!

How did you select the Interior Design theme for Absoluxe?

My biggest gift with this project was that the 4 directors gave me free reign when coming up with the Interior design. My brief was simple, stick to the budget, and give each suite a unique theme! Although the rooms needed to be one of a kind. They also needed something to tie them together.

I required a theme that would give me enough scope to play with the theme artistically, but that could also be constrained to 4 rooms. I started to investigate ideas that would play on the number 4. The 4 elements, the 4 seasons etc, and it was while browsing bespoke hotels online when I came across Fogo Inn (which I recommend you check out) describing itself as one of the four corners of the world. I had the light bulb moment!

Do you have a favourite suite?

My favourite suite has to be The Oasis, it was also the one I was most nervous about. I could envisage how fantastic it could look! So, I felt the added pressure to execute it perfectly. I am over the moon with the outcome and the comments received from guests so far. It maybe the most pricey of the 4 suites, however its been booked out the most! Which is a fantastic testimony.

Did the size of The Oasis suite bring up any challenges?

It was actually a blessing in disguise! It gave me more space to play around with the theme and add elements I couldn’t use in any other suite. I wanted to play to the rooms strength and make the suite flow as one continuous space, moving seamlessly between bedroom, bathroom and living room. The suite has a ‘zen’ like feel because of this, even though the size allowed me to be extra bold with print, and a little bit excessive with the furnishings!

Were there any Interior Design changes you had to make during the project?

There were lots of elements to each room that had to change throughout the build. Mainly due to elements outside of my control, so I had to adapt the designs accordingly and quickly! It was a huge challenge to work in partnership with all the structural changes and the challenges that come with working in an old building. The biggest challenges came in The Orient, which had to be completely redeveloped. I lost count of the amount of times I ended up re drawing my design.

How did you develop the aesthetics for the entrance / hallway?

This was one of the last things to come together, I wanted the hallway to reflect each of the rooms but not give too much of the theme away. The concept developed quite naturally, once I had planned the artwork, everything else started falling into place.

What was your inspiration behind The Parisian?

The inspiration came from one of my favourite paintings ‘The Balcony’ by Manet. I studied this painting whist looking into the perception of women in 19th century impressionist art at university. The elaborate Dress, intangible wealth & dominant women at the centre of the painting inspired me to create something unapologetically luxurious & feminine. The intrigue behind the painting led me to think ‘what is beyond the balcony’?

What was the biggest challenge in designing The Orient?

The shape of the room is very unusual, and this made it a challenge practically as well as from an interior design perspective. As the room is naturally quite dark and has relatively low ceilings i felt it married with traditional South Asian design. My aim was to be bold and brave with the concept, so I didn’t shy away from colour. I didn’t want to mask the fact it was the smallest suite; I wanted to embrace that fact and make it one of its strengths.

What was the main focus when designing The Columbus?

The penthouse suite has incredible views over the Yorkshire Dales. I really wanted to make this a feature. So we incorporated a raised platform with a big comfy armchair and telescope. So that guests can spy on the hills. The whole suit has a very industrial feel with touches of nautical design. To pull the design back to its inspiration of Christopher Columbus discovering the New World! 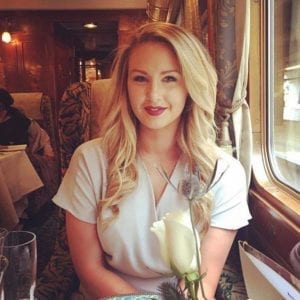 You are also the Artist in Residence at Absoluxe, how did this effect the Interior design process?

In some cases, I had the artworks planned before the interiors. The art helped shape the room and this was particularly the case in The Oasis. I started painting the artwork months before I had drawn the designs for the suite. Or selected any of the colours of furnishings. It’s not a conventional way of designing a room, however I like to think it worked out.

Sally, what is your next big Interior Design project?

At the moment I am formulating some ideas to redesign an office space, focusing on bring the team together and giving a better user experience for the client. Again, it’s a project like nothing I’ve worked on before, however I can’t wait to get stuck into the designs!

What became apparent to me during my discussion with Sally was the process of how ideas are formulated  and built on. The genuine artistic flare an individual needs to have to design interiors to suit our personalities and lives – the marriage of psychology and art!