When the owners of two interiors companies with a reputation for excellence decided to pool their talents the result was never in doubt. Aquajade Bathrooms, which work on many of Cumbria’s chicest homes and smart technology experts Majik House have years of experience in their respective fields. Not surprisingly, their joint project, Absoluxe Suites in Kirkby Lonsdale is Absolute Luxury. 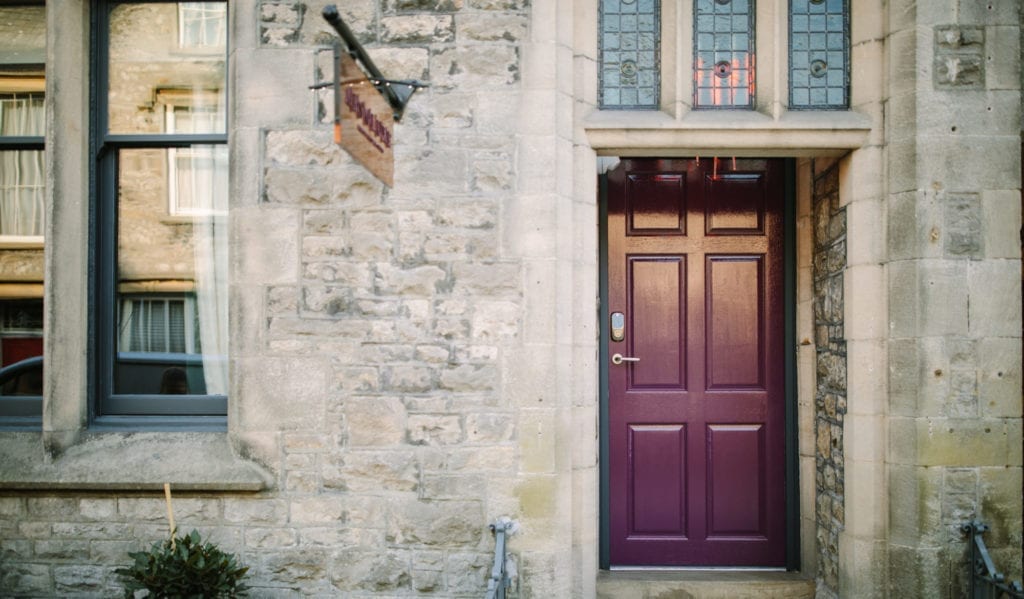 The team behind Absoluxe are Aquajade’s owners Phil and Zuzi Armstrong and Majik House’s Tim and Carol Burrow. The business partners have transformed a property on the town’s Main Street into four self-contained suites for couples. Launched earlier this year, they’re proving popular for celebrations, special occasions and short breaks. Both businesses are based at Kirkby Lonsdale Business Park just outside the town. and have cooperated over the years by sending customers to each other. It was when Phil, Zuzi, Tim and Carol went away on a culinary trip to Lyon that a chat over a few bottles of wine turned into a discussion about how they could work together.

Carol told Cumbria Life “We said there must be a way we could draw our two businesses together and show them off”. The idea for suites was born and Kirkby Lonsdale was chosen. Partly because of its growing popularity with visitors and also because it was close at hand.“We thought we could add something a bit different to the mix,” says Carol. The Main Street building turned out to be the perfect location. Because it has plenty of people passing during the day but is very quiet at night. The name Absoluxe is a play on the words absolute luxury. The suites have knockout bathrooms and the latest technology. To control lighting, temperature, music and entertainment at the touch of a button. 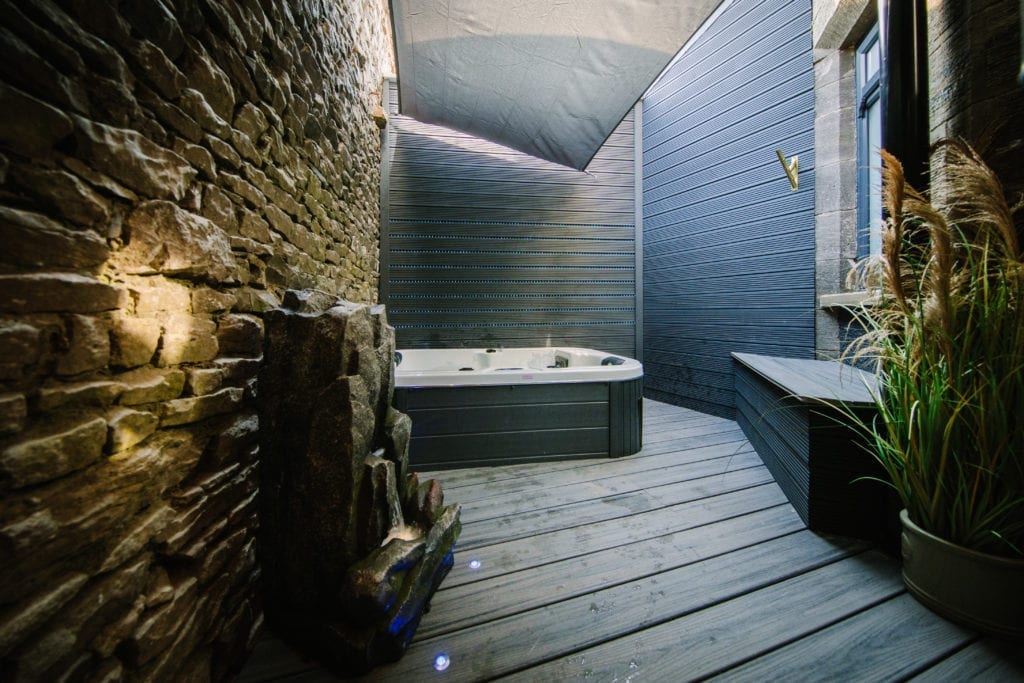 Sally Proctor, who studied art and design at Kendal College and then history of art in Manchester. Was already working for Majik House in marketing, when Tim and Carol became aware of her creative talents. After seeing her work, they knew that she would be able to tackle the project. The four partners outlined what they were looking for and set a budget. Carol says they deliberately gave Sally creative freedom, only stipulating that each of the four suites should be different.

As expected, guests have already expressed a desire to return so that they can stay in a different suite.“We gave her a very short brief. It needed to be themed because we wanted people to experience different rooms.” Carol said “From a business perspective it means we get repeat business”. Sally was still seeking her theme and researching hotels when she came across the striking Fogo Island Inn which lies off Newfoundland. It styles itself as being at one of the four corners of the earth.“It was a light bulb moment”. She tells Cumbria Life. 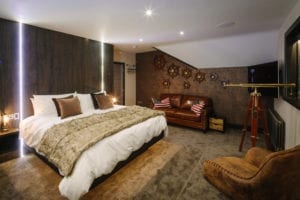 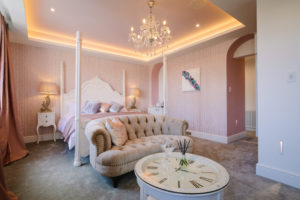 Taking the four corners as her theme, she came up with The Columbus, The Parisian, The Orient and The Oasis suites.

Inspired by New World America, has a nautical and industrial look. Ships’ wheels have been arranged on one wall to resemble cogs in a wheel. While a vintage map wallpaper has been used on another. The suite has lovely views of the Yorkshire Dales. A raised platform has been incorporated where guests can relax and use a brass telescope to admire the outlook. Sally says: “We specifically built that platform because the views are so beautiful”. A standout feature of the dressing room is a wall covered with rust. Using a technique that involves putting iron filings through a chemical reaction. To continue the metallic theme, the bathroom has a brass sink.

The Parisian suite has a romantic look and feel. Inspired by 19th-century painting ‘The Balcony’ by Manet. Imagining what might lie beyond what the viewer can see. Standout features are a luxurious four-poster bed, a velvet sofa and a chandelier. A coffee table with a working clock inside the top was from online retailer Maison du Monde. Many of the individual pieces, such as a pair of angel wings displayed on one wall, were from Toola Interiors in Bentham, North Yorkshire. “I had a very clear image in my head of what I wanted,” says Sally. “Sometimes that doesn’t help, to be honest. I was quite lucky that I was able to find 90 per cent of what I wanted.”A pink and metallic wallpaper is from Graham & Brown, from where wallpaper for all the suites was sourced. 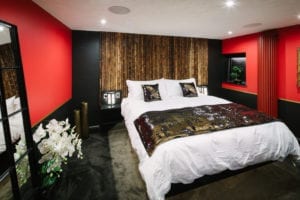 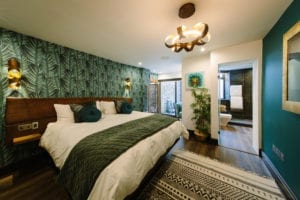 This suite is reached via a separate private entrance. Sally says the room lent itself to South Asian design and she chose a distinctive red and black colour scheme. “We knew it was going to be quite dark, there’s not a lot of natural light and the ceilings are lower. I wanted to use that as a plus point and using blacks and reds it does make it feel more luxurious”. Black Bamboo has been used to create the headboard. Furniture and decorations are from Maison du Monde and Toola Interiors. Phil sourced the stone-effect bathroom sink from a supplier in Spain. Outside, a small courtyard has been used to create a space for a hot tub.

Sally says The Oasis, the largest of the suites, feels very calm. The size of the space inspired her to use a bold colour scheme. Including a green velvet sofa from online firm Made.com. Animal-themed accessories and leaf-patterned wallpaper work well together. The en-suite bathroom has another distinctive sink, this time made from petrified wood. “Phil took great delight in sourcing these products to make each room look a little bit different,” says Carol. The suite also boasts a private Hot tub area. Sally is also the project’s artist-in-residence and her paintings and artwork have been used exclusively throughout. Portraits, abstract work, animal paintings and beautiful marble-effect discs have been made especially for the suites.

The Grade II-listed property was formerly a B&B called Wyck House and had also been used as a hairdressing salon with owner’s accommodation. The refurbishment work, which took about a year, was extensive. Carol says the end result is not only lovely accommodation but is a good way of showing prospective customers what the two firms can do.

Breakfast is a Continental hamper, delivered to the room. Or, a cooked breakfast served at The Sun Inn, five minutes away. Guests, who might take the whole building for a family party, bring extra business to the area. “It has a fantastic knock-on effect for Kirkby,” says Carol.“Guests are booking tables for 12 people at Plato’s and we have an arrangement with The Lunesdale Arms to pick them up”. Carol told Cumbria Life that months after they launched the suites, she still enjoys the novelty of seeing what they created. “It still hasn’t worn off for us. I quite like coming down on my own and walking around – it’s still at that stage.”

When guests arrive and use a code on the keypad., Their suite is made ready for them with lights and music switched on automatically. Carol says: “We’ve tried to think of every little thing somebody could ask”. She adds: “We’re very proud of it, not least because it’s our first venture into doing it. Our mantra all the way through was we’re going to deliver it to the best we can.”

Discover the Full article in Cumbria Life and Living Magazine